The news of Kumawood actor Kwadwo Nkansah Lilwin arresting a young lady blogger named Ohemaa Candace who owns the portal Ghsplash.com has been trending on social media after it was broadcasted on UTV and also published on their facebook handle.

The video which was captioned “Blogger in police grips for publishing fake news about Kojo Nkansah Lilwin” indicated she was arrested because she published a story Kojo Nkansah claimed to be fake—and with an assistance of the unscrupulous Abeiku had to use some policemen to coerce and humiliate the young lady who at the time, was only doing her job.


What are the facts?

Kwadwo Nkansah Lilwin yesterday was captured on camera explaining to the receptionists at the front desk of Peace Fm that—the day before that— he was parking his car when he heard a guy screaming for help claiming he has knocked him down. 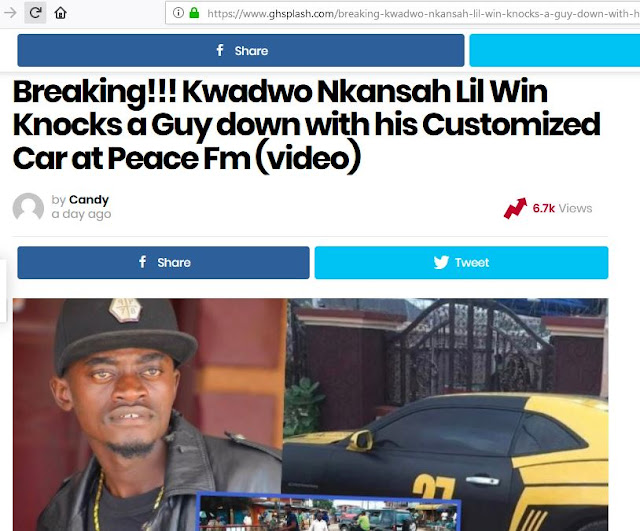 Nkansah explaining himself was as a result of the fact that, the person who claimed to have been knocked down had come to report to the receptionist.

Which Lilwin continued to explain that, he didn’t knock him down with his car but because he is a star, that person is doing that to get some money from him.

And the point where Nkansah Lilwin was reacting to the ‘knock down’ can be viewed in the below (as captured by Ohemaa Candace, the same blogger).

According to what gh page gathered from those who were around denoted;

The next day(Which was yesterday) the receptionist asked Lilwin about that, which he explained his side of the story.

A bit part of the video above is when we saw the star, exonerating himself.

After the blogger reported what she has gathered — which obviously — didn’t go down well with the star actor, had to do all things possible to disgrace the young reporter—aided by Abeiku.

The blogger, Ohemaa Candace was able to be captured because she was interviewed on Neat Fm (Peace Fm’s sister station) that same day and was at their premises throughout the day.

With Kwadwo Nkansah, having an interview on one of their radio station that particular day.


The Okay FM’s presenter has a special hatred for that same blogger because she once reported a story he didn’t like.

The ‘deluded’ and self-styled notorious social Media evangelist, Addai accused Abeiku Santana of killing his daughter and bodyguard for rituals.

The Evangelist continued that Abeiku’s first marriage collapsed because the wife saw Abeiku sacrificing his daughter and bodyguard which she thought might be the next to die so had to divorce him.

Now, these accusations were published by the said blogger on her weblog.


Taking all these into consideration, Abeiku saw it as a fine opportunity to take his vengeance—thus, use Lilwin’s case, call the UTV cameras, call the police,handcuff her, put her on TV to humiliate her — just because ‘she once published a bad story about me I didn’t like’.

Meanwhile, Abeiku Santana is an expert in architecting fake stories to promote his ‘atuu’ show on UTV. You remember his incident with actress Joselyn Dumas?

Abeiku Santana after an interview with Joselyn Dumas, distorted portions of it to make it look like the actress once dated John Dumelo for two years.

The video insinuated that the two celebrities starred in three movies back-to-back and ended up falling in love leading to their 2-year relationship.

However, the Ghanaian actress and on-air-personality, Joselyn Dumas denied reports and when UTV was forced to release the raw footage — it revealed that the first video which suggested their relationship was doctored— an operation undoubtedly pioneered by Abeiku Santana to promote his show.

So for Abeiku to ridicule the blogger, calling his website fake and brandishing her in that manner clearly shows he is a humbug.

Also, Ghana is such a failed country that, where in this world will you see a journalist/blogger being handcuffed in such a manner because he/she has written a ‘fake/false’ story about someone— even if it is.

Defamation of character is a civil case. If you are a star or whoever and you believe a blogger has defamed you, sue the person and not involve in this charade Abeiku and Lilwin engaged in.

And to see the Ghana police aiding in this kind of abatement is the saddest part of it all.