A+ A-
Print Email
A former AIDS Ambassador, Joyce Dzidzor Mensah has threatened to commit suicide along with her three adorable kids on Saturday.

Joyce Mensah, who courted huge controversy after denouncing her HIV status after five years of leading an HIV/AIDS campaign, said she will go to her hometown where she plans to kill them and kill herself.

She is set to grant her last radio interview before moving to her hometown in Peki Dzake in the Volta region of Ghana.

“These are my three children. Today is our last day on earth,” she declared in a Facebook post with a family photo of herself and the three children, threatening “Am going to kill them and kill myself”.

According to her, the family has suffered a lot of discrimination and humiliation after she came out publicly to tell the world that she was living with HIV/AIDS.

She had to denounce her HIV status, she said in an earlier interview, to save her children from the public stigmatization.

Her post on social media reads: “These are my three children. Today is our last day on earth. I have my last interview at 3fm this afternoon. I will then proceed to the village where my children are.

“A place where my children will not be sacked for school fees, a place where we will not pay for accommodation. A place where no one will beat me for using their bathroom. May our souls rest in peace.”

When TV3 contacted her on phone, she sounded sad and was sobbing.

Meanwhile, the Media General group has informed the Ghana Police Service who are putting together every effort to  talk her through the decision to commit suicide and give her the needed support . 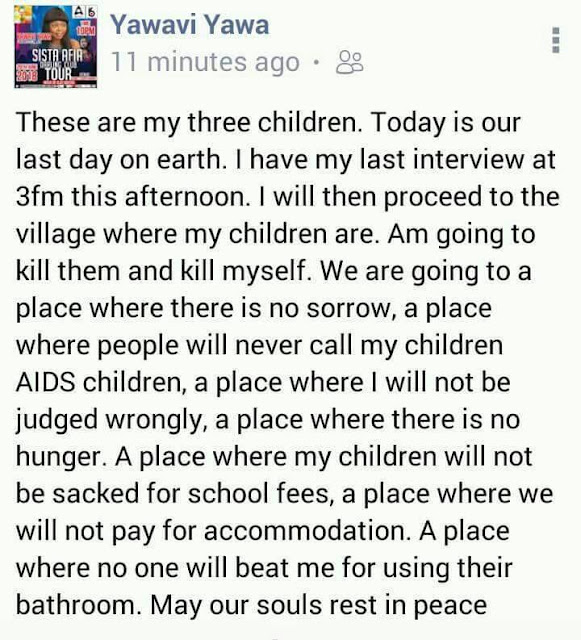