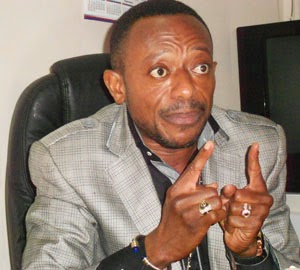 He disclosed on Asempa Fm on Friday that since the controversial man of God claimed to have known who the killers of the former Vice President are, he must not be left off the hook and should be arrested to provide the names.
“We are seriously mourning the death of a respectable person in society. We thought his death was an act of God but since he is all over the place claiming to know who killed Amissah Arthur, I will ask the security agencies to go after him to provide the names of those persons”, he said on the show monitored by MyNewsGh.com’s head of political desk.

A livid Asafo Agyei disclosed that the country is fed up with the so-called prophets who have taken the country to ransom with fake prophecies.

“What I know is that God reveals to redeem but some of the prophets in Ghana only specialize in death prophecies and every 31st December night come out with the list of people who will die to capitalize on the gullibility of Ghanaians to enrich themselves. They drive the most expensive cars and live the luxurious houses in Ghana at the expense of their poor congregation’, he chided.

His anger was directed at Reverend Prophet Owusu Bempah who prophesied the death of Amissah Arthur as far back as December 2017 on Okay FM, repeated again this morning the issue and vowed to name those behind the action

Speaking Twi, he said “I have told you what the NDC people did already. They paid a debt with Amissah Arthur, and right now, I don’t want to hurt the family with my comments because the pain is raw. But after the funeral, we shall see. I will speak out”, he told Okay FM this morning.

“I am very serious. You know Okay FM if you ask me questions, I answer. Please let’s not go there now. Let’s hold on, after the funeral, I will tell you everything. I am very sad”, he said in response to a question to name the ‘murderers’ of the now late former Vice president Paa Kwasi Amissah Arthur.